Classical ideals in all sizes

I work primarily with sculptures in stoneware. Humans fascinate me. The position of the body expresses a feeling, a mood.

I strive after a clear outline, compactness of form and a textural surface. I also simplify the figure somewhat.

I also make portraits. To make a portrait I use photographs of the person's head. Besides I would like the person to sit for me two or three times.

I want the portrait to look like the person but I also want it to be a sculpture in itself.

Birds are another favourite of mine. We have lots of different birds in the garden, I watch them and sculpt them, from birds of prey to the tiny wren.

Dogs, cats and horses are also to be found in my studio.

I cast many of my sculptures in bronze.

I nearly always sculpt in clay first and make a cast of the sculpture in wax afterwards.

This casting method is called cire perdue which is French for lost wax. This is due to the cast in wax being burnt away, before the melted bronze is poured into the mould.

Exceptionally I'll sculpt directly in wax. Often there will then only be one copy of this sculpture, whereas I sometimes make up to six copies of the ones that I sculpted in clay.

It is very common to make several copies of a sculpture in bronze. In Denmark we make six or eight, if you make more than that, the copies will be considered mass production and the prize should be lowered accordingly.
Personally I never make more than 8 copies and most often not even that many. 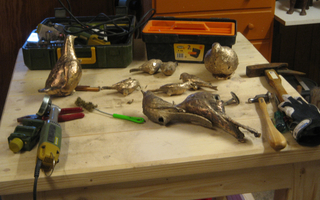